Pronunciation Tips For 25 Most Commonly Used Words In English 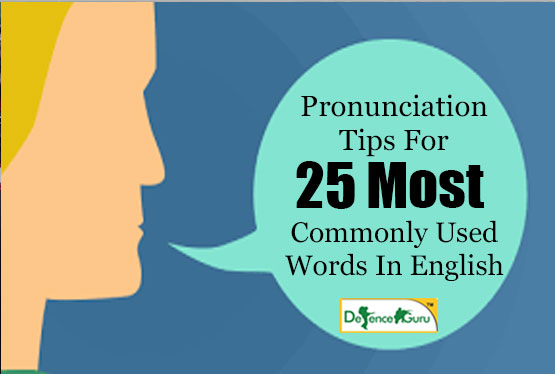 India is known to be one of the highest English speaking populations around the world. English has become an important language to communicate and express. Even in our day to day language we unknowingly use various English words. But as we know that English is not our mother tongue, so some of us definitely find it hard to spell a few words. Usually, when spelling a word we pronounce it according to the vowel sounds as we do it in our regional language. This makes the spellings confusing at the same time counter-intuitive.

Here is a list of few words which are commonly used while reading and speaking. Definitely we are going to find these pronunciations a bit tricky.

It is a nut that is quite popular among Indians because of its unlimited health benefits. While pronouncing the word ‘l’ sound should be silent. So the pronunciation is ‘Ah-muh-nd’.

It is the most important part of the organ in our body that pumps the blood to different parts or organs of the body. It is usually seen that people pronounce this word with short ‘a’ sound. It would be better to use long ‘aa’ sound as ‘Haa-rt’.

It is a monument built to the memory of a dead person. We often hear people pronouncing as ‘tom-b’. But it should be articulated as ‘Toom’.

It is known as common long term inflammatory disease of the airways of the lungs. It is commonly mispronounced as ‘as-tha-ma’. The correct way to pronounce it is ‘Az-ma’.

It is a round container which helps to server food. The most common mispronunciation is ‘ba-ool’. It should be pronounced as ‘Bo-hl’.

Wednesday is the third day of the week. This day comes between Tuesday and Thursday. When we pronounce the word, the first ‘d’ of the spelling is silent. That is why the pronunciation is ‘Wenz-day’.

It is known as the second month of the year which has 28 days. In India, it is mostly mispronounced as ‘feb-yoo-a-ree’. The word is pronounced with first ‘r’ sound as ‘Feb-roo-a-ree’.

It is a collection of expensive rooms in a hotel to stay. As the spelling refers it is mispronounced as ‘suit’. Let’s pronounce it ‘sweet’.

It is a government organization to maintain law and order in a location. We have been pronouncing this word as ‘poo-leece’, which is wrong. This word is pronounced as ‘Puh-leece’. Shocking!!!

It is usually a taste which we sense while eating something tangy or acidic. Sometimes people pronounce it ‘saar’. But the correct pronunciation is ‘Sower’.

We all are familiar with the word. It is Italian bread with sauce, cheese and a variety of other toppings. As the spelling suggests we tend to pronounce ‘pi-za’. But the correct articulation would be ‘Peet-zuh’.

It is an act to put something inside the ground and cover it with the earth. While pronouncing the word ‘bari’ is the wrong version. The pronunciation of the word should be ‘be-ri’

It is a voucher that allows the holder some kind of discount on a commodity or service. In India, we pronounce the word as ‘koo-pun’ which can’t be considered right. The correct pronunciation is ‘Koo-pawn’.

It is the plural form of a woman. Many of us pronounce it as ‘woo-men’ which is actually a wrong version. It should be articulated as ‘Wih-men’.

It is referred to as a style or category of art, music or literature. At times it is pronounced as ‘jen-ner’. The correct pronunciation would be ‘Zhon-ruh’.

It is the first meal of the day. While pronouncing this spelling we separate the word into ‘break’ and ‘fast’. It would be better to pronounce it as ‘Brek-fust’.

It is a mosquito-borne infection which causes a high fever. It is a deadly fever. It is commonly pronounced as ‘den-geu’ which is mispronunciation. Make sure to spell it as ‘Den-gee’.

It is a term usually used in computing. It is commonly mispronounced as ‘cash-ay’. Let’s remove the ‘ay’ sound and pronounce it as ‘cash’.

It means remains of anything destroyed and broken down. While pronouncing the word, avoid putting‘s’ sound at the end. It should be articulated as ‘Debree’.

A monk is a religious member who practices religious asceticism. In order to pronounce it correctly avoid ‘o’ sound. It should be pronounced as ‘Muhngk’.

It is a female’s intimate apparel. Mostly it is pronounced as ‘lin-guh-ree’, which happens to be a wrong version. The best way to pronounce is ‘Lawn-zhuh-ray’.

It is a large formal meal sometimes followed by a speech in order to honour someone. At times it is pronounced as ‘Ban-kway’ which is a wrong pronunciation. The correct one would be ‘Ban-kwet’.

These are only a few words which are mispronounced in India. In order to communicate effectively, we definitely need to pronounce the words correctly. So next time when coming across any new word, make sure to refer a dictionary for correct pronunciation.