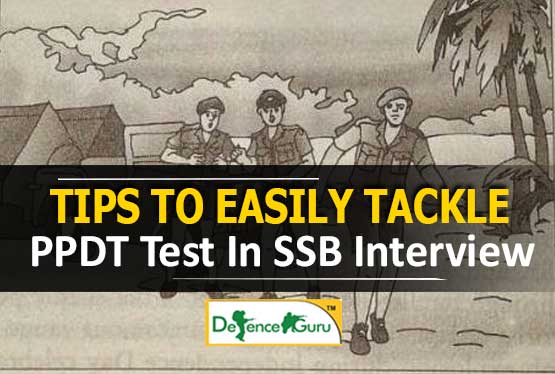 PPDT elaborated as Picture Perception and Description Test is an important phase of SSB interview session. Today’s article is to highlight the procedure and render some useful tips to all the aspirants of Indian Armed Forces regarding PPDT.

To commence with, PP&DT was introduced in 1989 with an aim to help in the procedure of screening out. Before 1989 there was simply no salient reason for elimination/ screening out as the crowd was less. As the number of aspirants increased the need for elimination grew and hence PP&DT got inducted in SSB. In fact as per some market books PP&DT is not a full proof method but to tell you the truth it is a scientific, full- proof process which depicts the potential of a candidate and helps in deciding who could stay further.

In PP&DT wherein an image is shown on a slide for 30 seconds. Candidates have to quickly perceive and draw their imagination within these 30 seconds based on which they have to draft a story in 4 minutes time, narrate it amongst the group members and get to a conclusion.

There is a list of elements that a candidate has to perceive in the shown picture such as:

Coming to the first part- ‘what led to the story’, herein hero identification is required. You can name the central hero based on your friend’s name to easily remember it. Keep his age near your age. Keep him a common man, for instance if he is wearing a turban you can show him as a farmer or if the background is green you can locate your story in a hilly region. Hence background of image is also significant in hero identification and setting of your story. Next, search for that one central clue from where your main story can emerge. In 2- 3 lines write hero identification, crisis/ problem/ prime action of the story.

The second part deals with ‘what is going on’. Here you have to write about involvement of the hero, action of the hero, his resourcefulness, his planning, his ability to convince people, his ability to utilize resources effectively and the action of his subordinate. Remember that actions must be in relation to the situation and theme should be problem- solving.

Third in line is ‘outcome of the story’. Cover it in 2- 3 lines. Here is a secret: take short theme as you can show depict more ideas and set of actions that too in an effective manner. Do not insert problems unnecessarily. You can simply skip crisis by keeping themes like that of picnic or organizing a football match from start to end. Only if the slide has stressful expression then insert a problem else keep it happy, neutral and showcase hero’s appositive action and ability to plan.

Once the candidates have completed drafting the story they are called to narrate it amongst their group. Try not to stammer, have confidence and eye contact. You can switch to Hindi language if you face any difficulty but keep English as the central mode of narration and communication.

When the time to draw conclusion comes your task is to create such an impressive situation that everyone in group nominates you to draw conclusion. If this happens, accept the offer gracefully and say ‘thank you friends for giving me this opportunity to conclude. Our story goes like this…’ Take good and complete opinion of your group members and conclude in 30 seconds to 1 minute time. say ‘thank you’ in the end.

ADD- ON TIPS: Here are some extra tips in context to ‘narration’: don’t create fish market; speak but don’t shout; encourage other members to speak; have confidence; and build up your knowledge.

Furthermore here is an insight into the JUDGING PROCESS. There will be 3 Officers who shall assess the candidates based on following parameters:

Interview Officer will assess on: power of expression+ conduct of the candidate in the group, that is, his ability to co- ordinate well with other members.

The GTO Officer will assess on: candidate’s co- operation level; his adjustment level; and whether the story suggests social factor or not.

Candidates must satisfy all three Officers. Add to that the judging Officers will also refer to the aspirant’s OIR before declaring the result hence practice well for the OIR. All the best!

Must Know Qualities Of An MNS Officer